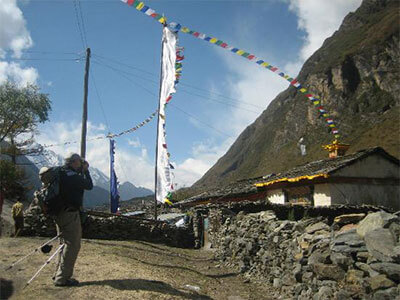 Manaslu tsum Valley trekking is actually good place to spend your holidays. There is lot of things it’s really interesting to know. The place is located north from the Kathmandu. In Tsum valley the people are flowing Tibetan Buddhism and culture language are also similar like in Tibet. The local people are habitually of Tibetan origin and speak a unique language. Tsum Valley was a secret region waiting it is opened for trekking in 2008 and there is small information available on the area. The tsum Valley is a holy Himalayan Buddhist pilgrimage valley located in northern Gorkha Nepal. Exactly “Tsum” means vivid against the magnificent scenery of the Ganesh Himal, Sringi Himal and Buddha Himalayan Ranges, this peaceful Himalayan valley is rich in very old art, culture and religion. The local people are habitually of Tibetan origin and speak unique language. Trails are strewn with imaginative Chortens and lined with Mani walls made of thousands of stone slabs fixed with drawing of deities and inscribed with prayers. The famous Kyimu Lung, a pilgrimage circuit in the central Trans-Himalaya, is well well-known for its center of learn and meditation.

This circuit traverses the Tsum Valley the Manaslu area in Nepal, and southern parts of Tibet. The Tsum Valley has long history of Buddhism. The Buddhist saint Milarepa is believed to be meditated in the caves of these mountains. Traditionally, the valley was a culturally distinct geographical called “Tsum Tso Chuksum”, which means thirteen provinces ruled as a single area. The very old remains of the Tsum Kingdom are still visible today. Due to its remoteness and inaccessibility, this holy valley and its people have been bypassed by typical development for centuries. As a result, the only one of its kind culture of this valley has remained intact. The valley is drained by the Shear Khola, which originates from the western glacier of Ganesh Himal and east and southern glaciers of Sringi Himal and meets the Budhi Gandaki at Nyak. The valley is uniquely rich in wildlife, especially the Himalayan Thar and Blue Sheep which congregates in herds of 50 to 200. Hunting, fishing is not allowed in the Tsum Valley. The valley also boasts some unique and historic monasteries, as well as Rachen Gompa and Mu Gompa, which lie on a pretty plateau nestled in the lap of the valley and Gompa Lungdang, situated at the base of a pointed hill against the main hill of Ganesh Himal.

Numerous festivals, several mask dances and rituals are celebrated during the year in the Tsum Valley preserving the century old practices. Loshar:- LO means year and SHAR means new, the Tibetan word meant of Happy Loshar (Tibetan New Year) celebrated according to the Tibetan Lunar Calendar offering large quantities of incense to appease the local spirits, deities and protectors. Tsumbas of the lower tsum valley celebrate Loshar earlier than the upper Tsum people. Dhajang (The horse Festival):-The second most important festival of this region is celebrated on a slightly different date than the normal Dec/Jan. Committed to the welfare of the people, it is celebrated by the active male participants holding horse races leaving women to join in the evening for dancing and singing. Happy Saka Dawa:- The full moon day of Saka Dawa commemorates Lord Buddha’s birth, enlightenment, and Nirvana As cited by Lama Zopa Rinpoche in the Hinayana text Treasure of Quotations and Logic, virtuous actions done on this day (fall in May) are multiplied one hundred million times. Rituals are performed at local monasteries and nunneries and the devotees take fasting during this time.

Arrival pick up & transfer to Hotel. O/N at Hotel on BB Basis.

Day 07: Doban to Philim (1570m),
After breakfast, trek start with rugged trail with up and down continue to Philim through passing jungle and dramatically stunning view of Srigri Himal. Philim is a large numbers of Gurung villages with millet and corn fields. Overnight at Tented Camp .Day 08: Philim to Chumling 2360m/7743ft -6.30 hours Climb slowly uphill to Eklebhatti. Continue further reach the place one is going to Manaslu and next to Tsum valley. Walk with pine forest, ups and reach Chumling with the view of Shringi Himal 7187m. It is known as Lower Tsum.

Day 09: Chumling to Chhekampar 3000m/9842ft -5.30 hours Climb ups and down following with Syar Khola valley. Walk through pine forest to reach Chhekampar and it is situated on a flat land with view of Ganesh Himal, Boudha Himal and Himal Chuli. Here are 2 villages Chhekam and Par known as Upper Tsum valley. Here has been practiced polyandry marriage system for a few houses.

Day 10: Chhekampar to Nile – 3350m/10990ft -6.30 hours Climb through the shrubland to the last village Nile/Chhule in Tsum valley. There is a piren phu (pigeon cave) which is believed once Milarepa was meditated here is situated at cliff nearby Burji village. There are 2 Gompas with carvings stone on the rocky cave.

Day 11: Nile to Mu Gompa 3700m/12139ft -4 hours Climb gradually uphill with gorgeous valley with grassland to the Mu Gompa. It is a largest Gompa of 19th century old. The is statue of Tara, Padmasambhava and Avalokiteshwara. You can visit to next old Dephyudonma Gompa 4050m/13287ft in 2 hours and here is possible camp with water.

Day 12: Rest Day in Mu Gompa 3700m/12139ft From here one trail leads to Tibet pass too. Take a hike towards Pika Himal basecamp which is nearby Tibet border and the view of Ganesh Himal range is superb here. Back to the camp and stay overnight Mu Gompa.

Day 13: Mu Gompa to Rachhen Gompa 3300m/10826ft -5 hours Walk with grassland to the Rachhen Gompa. It is 19th century old and situated Shiar Khola valley nearby Tibet border. Here are only nons (woman) and is not allowed some part of the Gompa. Here is big Mani and thousand clay statues of Avalokiteshwara. Stay overnight here.

Day 20: Departure to Tribhuban Internationl Airport You should enter the airport 3 hours before your flight schedule. It is 6 km car ride with our representative takes minimum 30 minutes time to get there. We hope you enjoyed once in Nepal and it is not enough so we optimist next visit with us for new programme. We wish you safe and happy flight journey to next destination with putting scarf (Khata). We make sure you are not going to pay any airport take because it is already included in your flight ticket.

Cost Does not Includes: